Just days ago, Danielle and I returned home to find thousands marching down the streets of Seattle in response to recent mass shootings 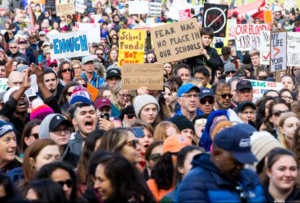 Turn on the T.V., check the news, read online forums or social media: you’ll find no shortage of debate on gun control, vastly opposed opinions, pushes for legislation, adamant defense of rights and beliefs, and of course, the tragic stories of the victims of these horrendous acts which we all wish to prevent.

Yet, at the heart of every argument, I believe there to be a common goal:

We want to be safe.

In 1948, the General Assembly of the United Nations adopted and proclaimed a document titled the “Universal Declaration of Human Rights” (UDHR). The 3rd article of the UDHR states, “Everyone has the right to life, liberty, and the security of person.” Recognized at this level as a basic human right, it’s no wonder the topic is so passionately debated.

I’ve found that as the preservation of our own life, liberty, and safety becomes encroached upon, we desperately seek any means to regain the stability and safety which we had robbed from us. For some, this means less guns, others, more guns. One may build a security fence, adopt a fierce (but adorable) guard dog, install video cameras, train in martial arts, etc. 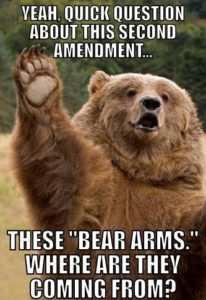 Though security is necessary for any individual, the effectiveness by which we achieve this varies dramatically

As it is with anything else; nothing outside of God has any true, lasting value. Similar to there being no purpose in life outside of God, I would put forward that there is no real safety outside of Him either.

For those of us adopted into the Kingdom, I believe now is as good of time as any to remind ourselves that our security is not granted by man, laws, walls, or guns. Instead we have the creator himself standing with us, having promised us His protection.

There’s a number of shifts that need to occur in the logic surrounding security and preservation of life for a Christian.

Jesus had his head in the right place concerning all of this. Knowing what was to come he confidently maintained and told others, “No one can take my life from me. I sacrifice it voluntarily.” (John 10:18)

A good friend used to joke each time we got in the car to brave blizzards and icy, Michigan streets, “Don’t worry, God has a plan for me, so I’ll be safe. Not sure what that means for the rest of you though.” We felt so safe….

We must come to a place where we are absolutely convinced that our lives are in the hands of the Lord, and we’re O.K. with how that looks. This doesn’t mean a life free from harm, persecution, and death. In fact, it should probably lead to those things! (gotta throw those hard teachings in there somewhere…) But, the when, where, and how is not in our hands, nor should we need to concern ourselves with them.

“But Cody, bad things happened to me and I don’t understand why.”

I hear you. I’m sorry. I don’t know why either.

Though this is a whole other topic, and please don’t take this as insensitive, I can confidently say this: our circumstances do not change who God is, His promises, or who we are in Him. Our friends, Bryan and Katie Torwalt, wrote a wonderful song with this extremely potent line,

“when I don’t understand, I get to choose to love you, God.”

Wow… Soak that in.

Though we may not understand why something occurred, those things provide us an opportunity to love God despite of them. A unique offering, we’d be unable to make otherwise.

Danielle’s family, while serving as missionaries in Mozambique…

…had armed intruders break into their home one night. With guns pressed to heads and chests, they demanded money and valuables. My younger brother, Matthew, thought to be the head of the household, was slapped across the face with a machete. Hearing the sound, Brian, the actual head of the household, a.k.a. Dad, thought someone had been shot. It was that loud! Thankfully, other than the machete slap, everyone was safe.

Iris Global, flew the family back to Pemba the next day. Brian recalled that at the airport, another missionary ran up to Matthew, threw his arms around him exclaiming, “Matthew I’m so proud of you! I can’t believe it! This is so… You’re so lucky! You’re so blessed! You are one in a million! You realize there has to be only 1 in a million westerners who suffer for their faith!” Matthew responded, having been lifted up from one of the most traumatic days of his life, “Ya! I did suffer for the faith!”

As a people who don’t belong to this world, it’s only natural that we look at the world, and our circumstances, a bit differently… 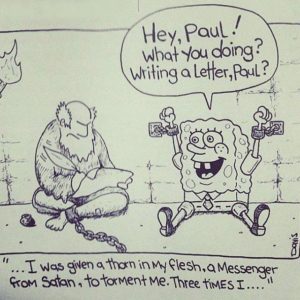 The Bible overflows with wonderful promises and stories of protection…

…all of which, we can claim for ourselves. These are rock-solid commitments that the Lord himself has made to us. Claim it; believe it.

As the world around us overflows with bad news, it is pivotal to keep these promises and stories of what He has done in the forefront of our minds. Lets rewrite the “what ifs”, changing them from the fear of danger to the amazing testimonies of what God has, can, and will do again.

That said, here are a few fun testimonies about God’s protection.

…Dr. Billy Graham relates a story in his book “God’s Secret Agents” about missionary John Paton and his wife in The New Hebrides.  It is said that one night they were surrounded by hostile natives who wanted to kill them.  They prayed through the night for protection and at daylight, saw that the attackers were leaving.  A year later, the chief of the tribe of the attackers became a Christian and Paton asked him about the night of the attack and why nothing had happened.  The chief was surprised and said it was because of all the men who were there protecting them, hundreds of them in shining garments and with drawn swords.

… In her book “The Spirits of Mindoro” published in 1988 by Overseas Missionary Fellowship, Catherine Davis talks about a woman who worked in the jungle on Mindoro Island in the 1950’s.  She was sleeping alone in her house one night when she heard men outside talking about killing her.  She prayed for protection and the men suddenly grew quiet, then ran away. The next day a woman from the village said that the men did not carry out their plans because of two large people dressed in white who were standing on each side of the path to the house.

“In one village, the rebels came into town and took the pastor and his wife and children and locked them up in his house and they burned the house down on them all. The only thing was, the Holy Spirit transported the family out through the flames without a singe.”

– Rolland Baker, speaking on persecuted believers in the Congo.

“A group of militants reached the house, armed with steel bars and other weapons. We had no idea what to do.” Paul recalls, “we thought for sure this was our last day. The children with us started crying. We all joined hand in hand and repeatedly praised and thanked our risen Lord Jesus Christ. We also continually claimed the blood of Jesus Christ as our victory…”

“Completely unexpectedly, a lion ran from the forest, leapt towards the militants, and seized one by the neck. When other combatants tried to attack the lion, two other lions bounded towards them. The terrified militants fled the site, and the lions left us completely alone. Equally astonishing, records show no lions are supposed to live in that forest.”

In my first year at Bethel School of Supernatural Ministry, I went to Tijuana, Mexico for my missions trip. The trip was filled with amazing miracles and salvation. Some of my favorite stories come from this trip. On our last day there, we were going down to “Revolution Street,” the tourist center of the city, where we would be ministering and preaching on a public stage. In addition to your typical gift shops, one can acquire most any type of legal or illegal goods and services.

For our safety, the team leaders issued a warning. “Don’t go further than the stage. Beyond that point is where all the prostitution is, and its very dangerous.” Given this was a large group of students, I understand their concern. Yet, one of our interns shared a testimony of a student who went beyond that barrier just years prior.

This individual, and I suspect many others, saw this area as ripe for the Kingdom. Where else would Jesus have been if not with the most broken and hurting, right? So off he went. Quickly finding a group of prostitutes, he begins to share the gospel with them. It wasn’t long until their pimp saw this. Not happy, he quickly makes his way over, intending to teach this gringo a lesson. As he reaches the student, the pimp is physically lifted off the ground and slammed against the wall, pinned.

The student says to him, “That’s my angel. If you’d also like to know about Jesus, just let me know.”

Years ago, while living in Georgia, we had a group of men attempt to break into our home.

Derek, a housemate and friend of ours, was the only one home at the time. Sitting upstairs in his room, Derek kept hearing this loud “thump!” Thump, thump, thump. It kept going on. But, for about 10 minutes, he didn’t think much of it. He actually checked the washing machine twice, thinking that was the source of the noise. Finally, since it wouldn’t stop, Derek went downstairs to see a group of large men trying to kick in our old french doors. They see him, he sees them, they run away.

At inspecting the doors later, we see footprints all over the doors, including on the small glass panes, but no damage. These doors were by no means sturdy. The glass, probably as cheap as it comes! Had I tried, I could have easily broken down the door. From then on we’d make jokes about it, knowing the Lord was protecting us and our home. Even the thinnest, weakest glass wouldn’t crack.

There’s so many similar stories! (I intend to add more to this list in the future, for fun!) Stories like these, of great faith and what is possible with God, are what I want to shape who I am and how I live. Not fear, not the media, not what the world says is normal. As another blog writer so eloquently put it,

“The archetype of Christian courage is not the sharpshooter hero, but the martyr.”

As always, thanks for reading and we love you all!